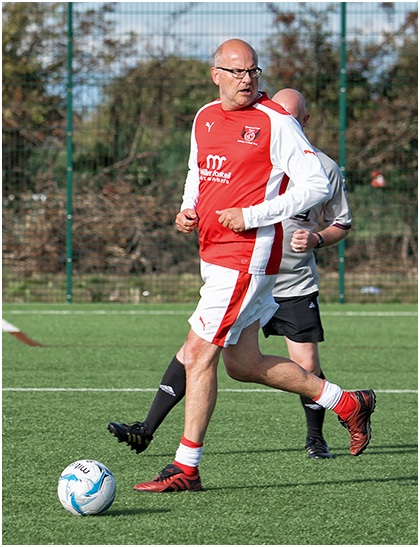 On the 18th July 2018 we lost a great friend and colleague and the world lost a lovely kind man.

Gerald had been battling a very aggressive form of kidney cancer since his diagnosis in late 2017. The bravery he showed during his fight against such a terrible disease was truly outstanding and remarkable to witness. He remained our Club Treasurer working from home behind the scenes right until the very end. Always thinking of others when he was so ill himself.

Gerald started playing walking football in March 2015 when he attended one of the first few sessions held at Poolfoot Farm. He was very busy at work and he was also the Chairman of Thornton Cleveleys Cricket Club. However, he always found time to attend his Wednesday football. Encouraging others right from the outset to get involved and enjoying the fact that he was now playing football again in his fifties! As numbers grew Fleetwood Town Flyers FC was officially constituted as a Club in March 2016. Gerald immediately agreed to take on the Management Committee role of Treasurer, a job he did with impeccably high standards always ensuring that subs were collected, banking matters were efficiently dealt with and bills were paid on time. Being an ex. bank manager, he knew how to do things properly and his stewardship of the accounts was very much appreciated by the Committee and all the Club members.

On the field of play he was a skilful player who was able to use both feet with a keen eye for goal. A minor knee operation only kept him out for a few weeks and he was soon back playing. At our Wednesday sessions he would always be assisting other players by offering words of advice and encouragement. The sign of a man who always put others before himself.

Gerald was our Treasurer, a brilliant football player and most of all our friend.

We will miss him terribly, rest in peace dear friend.